The years between 500AD and 1450AD are referred to as the medieval era. During this time, particularly in Europe, using strings of beads to count prayers was a very common practice in all levels of society. Paternosters were made in a
straight line (linear) style, or in
a closed circlet (loop) style.

Here's a closed loop paternoster
from my new collection, based
medieval designs.

Prayers were recited in Latin back then, and the prayer most often used was the Lord's prayer, starting with the words "Our Father" ... in Latin that is "Pater Noster", and so the prayer beads themselves became known as paternosters. 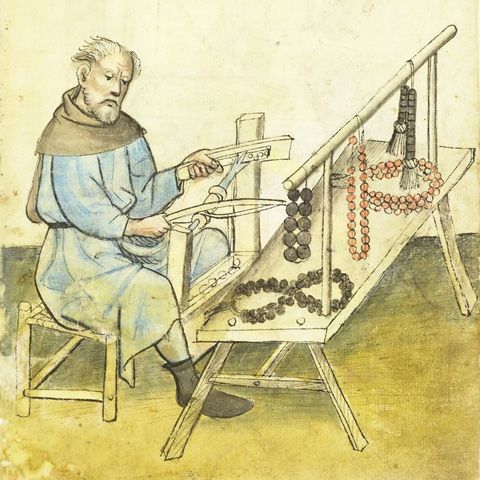 Here a Medieval monk makes
rosary beads from bone or
wood. Precious metals and
beads were used too.

Medieval rosaries were strung
on a variety of materials
including silk, wool, linen
&hemp. Linking beads with
metal wire became popular in
the following period, the
Renaissance.

My new collection features paternosters and rosaries based on the designs and examples of middle age prayer beads that still exist today, mainly in museums around the world.

The short rosary known as a paternoster is a great prayer aid for today's times, every bit as relevant and convenient as it was centuries ago. A real connection to the history of our shared prayer - and worthy of a revival among modern faithful. Another paternoster from
my upcoming collection.

This one is strung on silk
polyester cord, and includes
a thumb ring and tassel.

Medieval rosaries came in a large range of lengths. Strands of nine, ten, fifteen, twenty, thirty-three, sixty-three, seventy-two and one hundred and fifty beads were all used. The short form of the rosary was used with the Our Father prayer, and usually had 9, 10, 15 or 20 beads - a convenient size to carry with you for daily use.

A Rosary Pouch for My Handmade Rosaries Posted on 23 Jan 07:00